On a house show this weekend, WWE fans were treated to a Shield reunion…sort of.

When Seth Rollins joined Austin Theory and The Miz to take on Bobby Lashley, Dolph Ziggler and Kevin Owens in a 6-way main event at WWE Bismarck in North Dakota, fans had no idea they were going to see some sort of reunion. .

While the heels were defeated in the match, that didn’t stop them from taking a moment to strike a signature pose!

In the snap captured by a fan in attendance, you can see Rollins, Austin Theory and The Miz all posed in the infamous Shield pose. 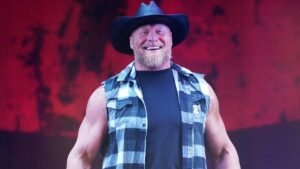 Bruce Prichard tells how his nose was broken by Brock Lesnar

Below are all of the WWE Saturday Night Main Event results live from Bismarck, ND. courtesy of Wrestling Bodyslam

Check out WrestleShop.com for all your favorite WrestleTalk merchandise, WrestleTalk magazine, adult wrestling shirts and more!