House of the Dragon: ‘Lord of the Tides’ (Episode 8) Review

Dragon House fast approaching its first-season finale, but results so far have been mixed. One of the biggest criticisms of the show is the constant toggling between narrative quality, episode after episode. “Lord of the Tides” continues the trend – as expected – but it’s not so bad.

Princess Rhaenyra and Queen Alicent in House of the Dragon, HBO

The show begins again another one time jumping in an effort to speed up the source material and establish the characters who will eventually face off in George RR Martin’s infamous “green vs. black” showdown. However, how it plays out on screen is another matter.

The story picks up several years after the previous episode, ‘Driftmark,’ and the chaotic events that nearly led to the murder of Princess Rhaenyra by a vengeful Queen Alicent. It looks like Corlys Velaryon is on the verge of death, after a battle in the hotly contested Stepstones. Corlys’ brother, Ser Vaemond, capitalizes on his lineage to try to secure Driftmark for himself. 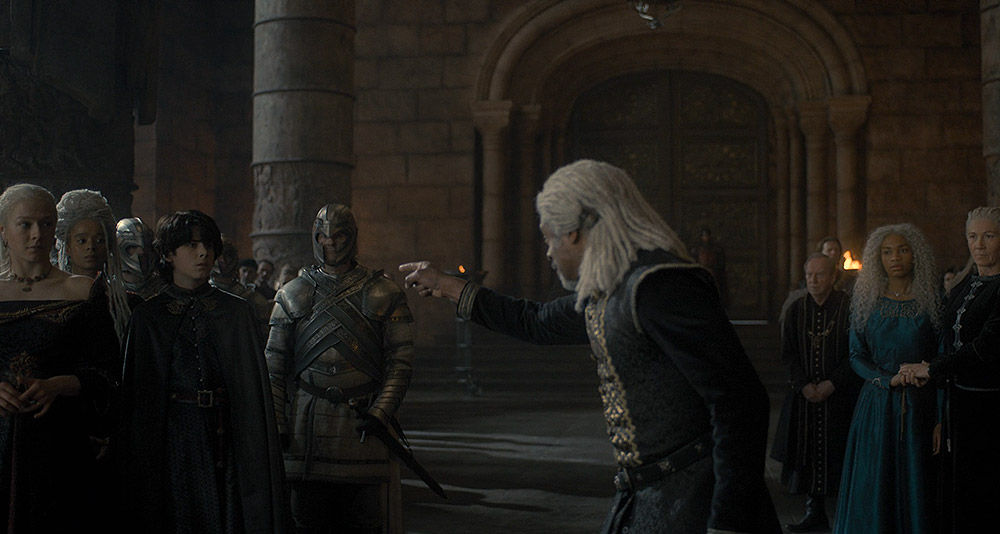 Ser Vaemond blasphemes the royal bloodline in House of the Dragon, HBO

Rhaenyra and her now-husband Daemon return to King’s Landing to dispute the claim, citing her son Lucerys as the true heir. What begins as a civil debate quickly erupts into anarchy when Vaemond loses his temper and openly accuses the children of Rhaenyra of being illegitimate bastards, prompting Daemon to chop off his head slightly above his tongue.

Meanwhile, a disfigured and deteriorating King Viserys calls for peace among his family members when he invites them all to a feast. However, as soon as they start mending the fences, resentment quickly boils over when Aemond insults the children of Rhaenyra, once again insinuating that they are bastards sired by the late Harwin Strong. 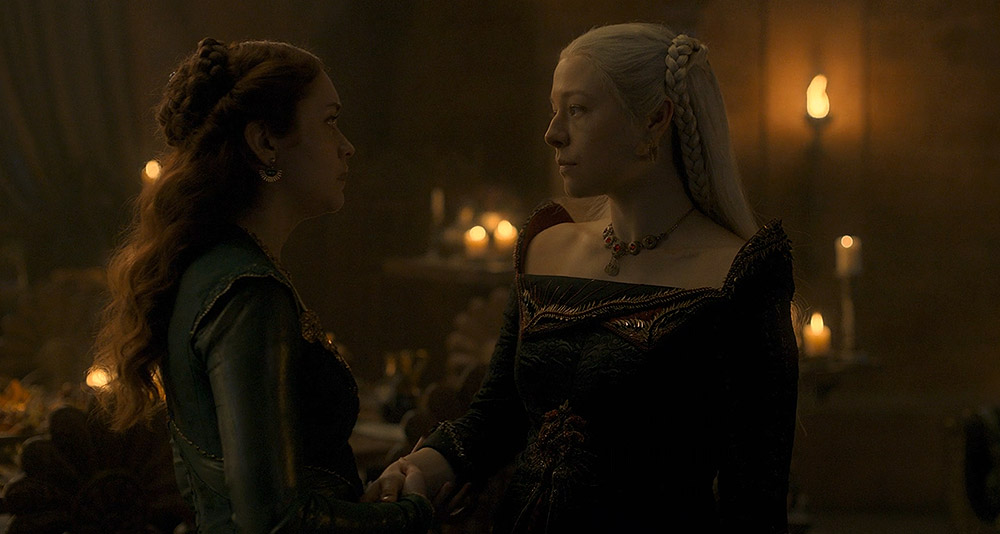 Queen Alicent and Princess Rhaenyra are civilians in House of the Dragon, HBO

For their part, Rhaenyra and Alicent are doing their best to negotiate peace after so many years of animosity, but it’s clear that confrontation is inevitable. The point is increased tenfold when a bedridden King Viserys rambles incoherently about Aegon the Conqueror in the presence of his wife, which is sure to exacerbate the problem.

The latter part of the first season fared better than the first, and that has a lot to do with the admittedly jarring time jumps in the timeline of events. Most of the stage has been set for everything that is to follow, and “The Lord of the Tides” manages to capitalize on this much more stable base. 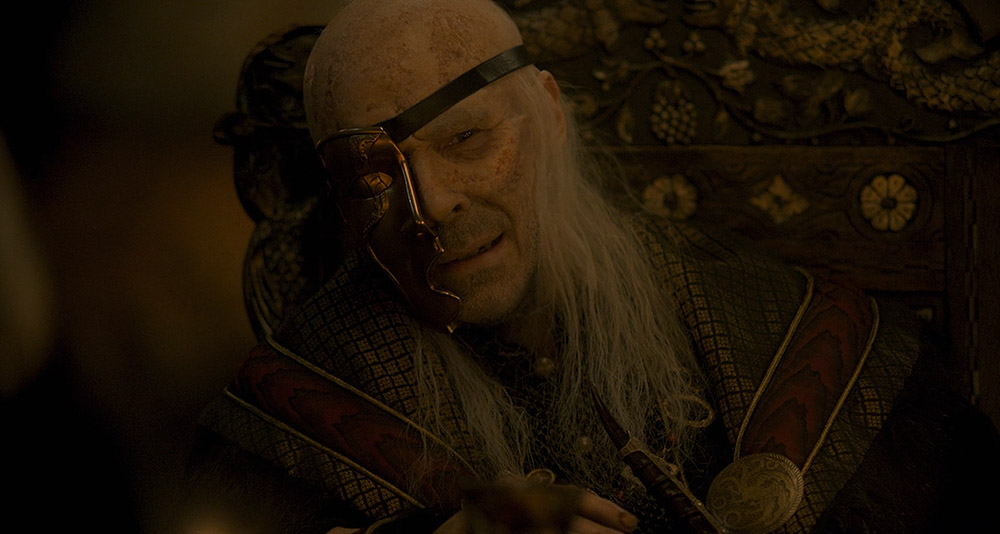 A Dying King Viserys at a Royal Feast at House of the Dragon, HBO

The actors’ performances are always a highlight of the show, even if they can’t quite live up to the brilliance of the game of thrones cast. The talent is there, and it’s only limited by what little source material it’s had to draw from.

One of the most incredible moments of the episode – and perhaps the entire season – is the feast shared by the family in the second half. King Viserys’ plea for peace between his loved ones is a heartfelt, touching and very moving moment, and what comes next is something remarkable. 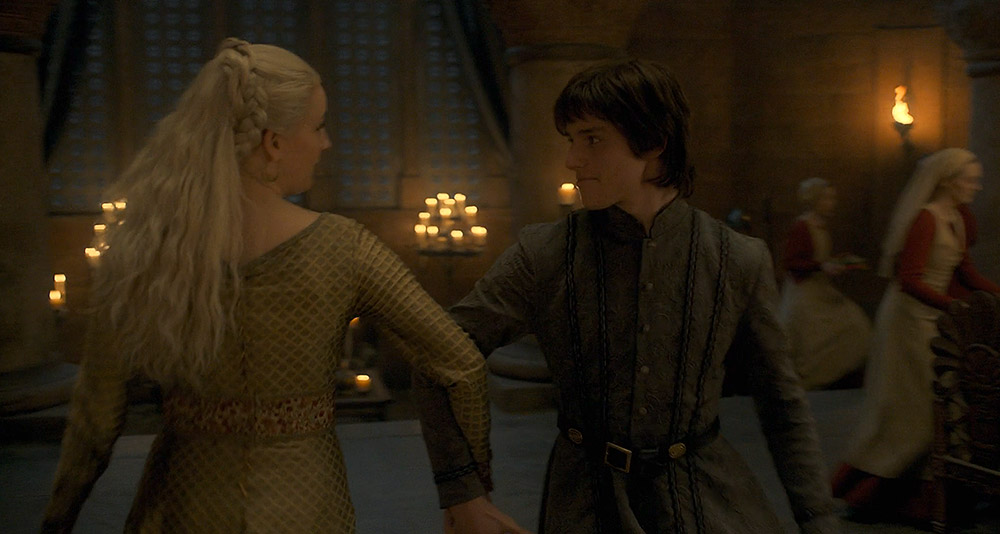 Two royal children dance in House of the Dragon, HBO

RELATED: ‘House of the Dragon’ Star Emma D’Arcy Says ‘It’s Too Extreme to Say Rhaenyra Targaryen Asks Gender, But She Pushes the Boundaries of Womanhood’

For the first time, the family members behave like a real family, enjoying the evening as King Viserys had always wished. Seeing Viserys in such a fragile state of decay makes him very sympathetic, especially since he always tried to be a noble and just king. Seeing him finally get his wish, even for a brief moment, is quite touching.

It’s also touching for the audience to see the family members laughing, talking and enjoying each other’s presence – even the stoic and unreadable Otto Hightower, who beams with happiness. This one scene means everything a royal family in Martin’s fantasy world would ever be – but secretly wished they could. 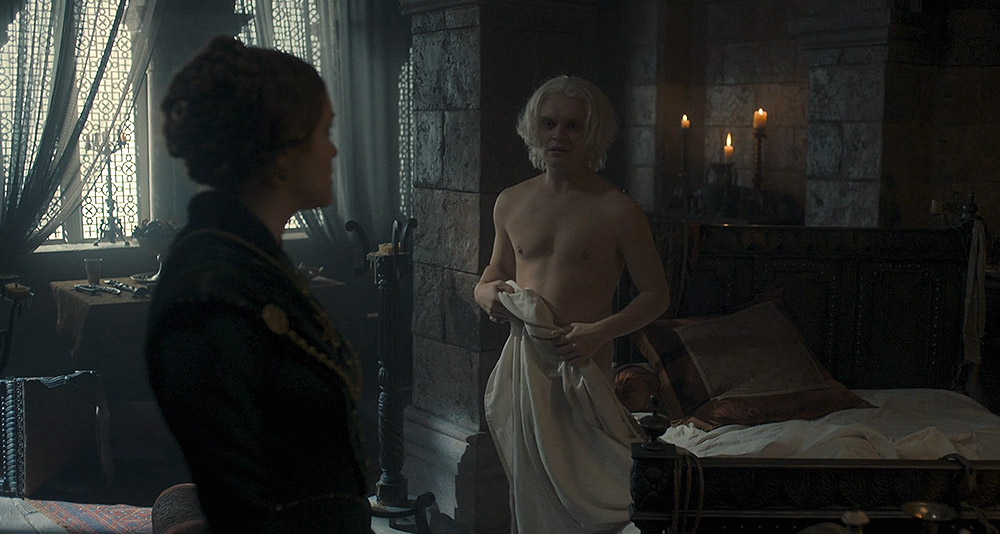 Queen Alicent takes on Prince Aegon in House of the Dragon, HBO

Again, the episode is short on action and big on conversation, but several important plot developments take place here, and anything that manages to nudge the story toward its meaty core is welcome.

Although necessary in theory, the incessant time jumps prevent the audience from really focusing on the story. This particular hurt grows every time showrunners and writers promise big payouts, only to hit the reset button for the very next episode. At this point, it became rather cliché. 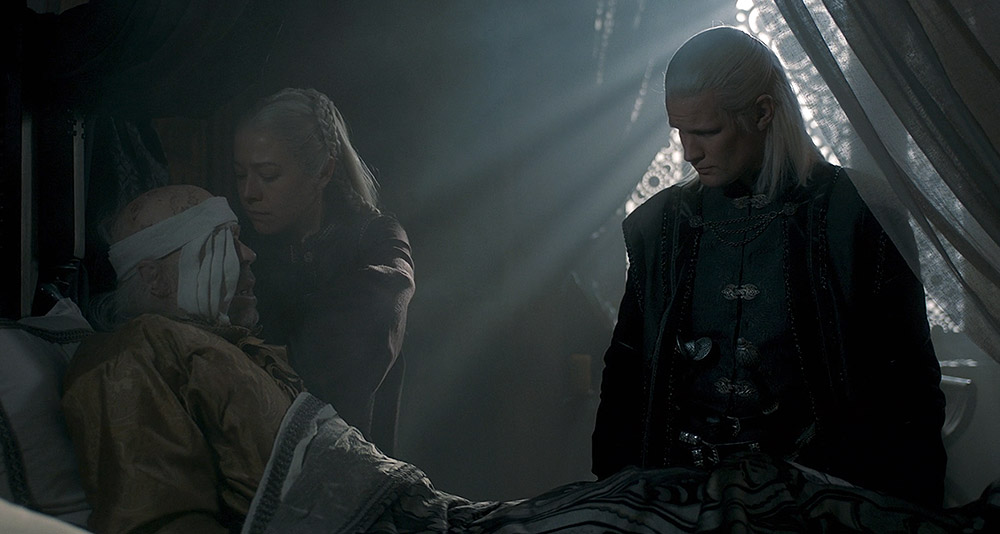 Rhaenyra and Daemon visit Viserys in House of the Dragon, HBO

Dragon House continues to fall into the same terrible trap of creating excitement and expectations, only to pull the rug out from under the public’s feet for no reason. A big part of this is the aforementioned lack of definitive source material from this particular era, which is only a fraction of Martin’s. Ice and Fire novels.

Nowhere is this more apparent than when it comes to secondary characters. Aside from the immediate main cast, no one else gets their time on camera. It’s a bit odd, considering several characters such as Ser Criston Cole and Larys Strong are basically forgotten at this point. 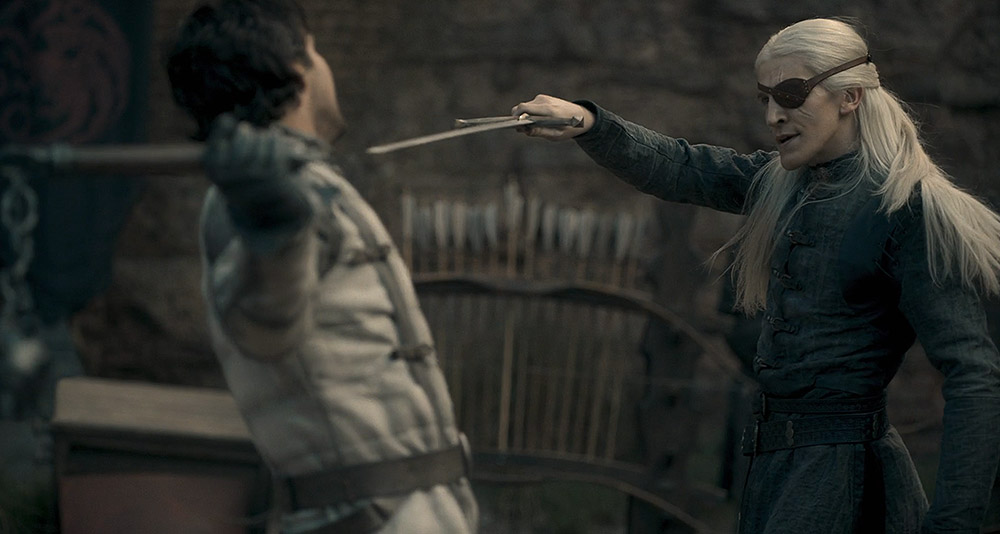 Aemond trains with Ser Criston Cole in House of the Dragon, HBO

Strong, for his part, was supposed to play the character of Littlefinger who manipulates events to enhance his own power, but again the series’ time jumps and inconsistent focus on characters left him kicking butt. foot somewhere in Westeros.

Last week’s episode received praise for exercising the kind of criteria that made game of thrones so addicting to watch, but “The Lord of the Tides” seems to have to rely on dialogue to fill the gaps. The long periods of inactivity in the show’s timeline work against it; maybe an indication that Dragon House should never have been green lit as a series. 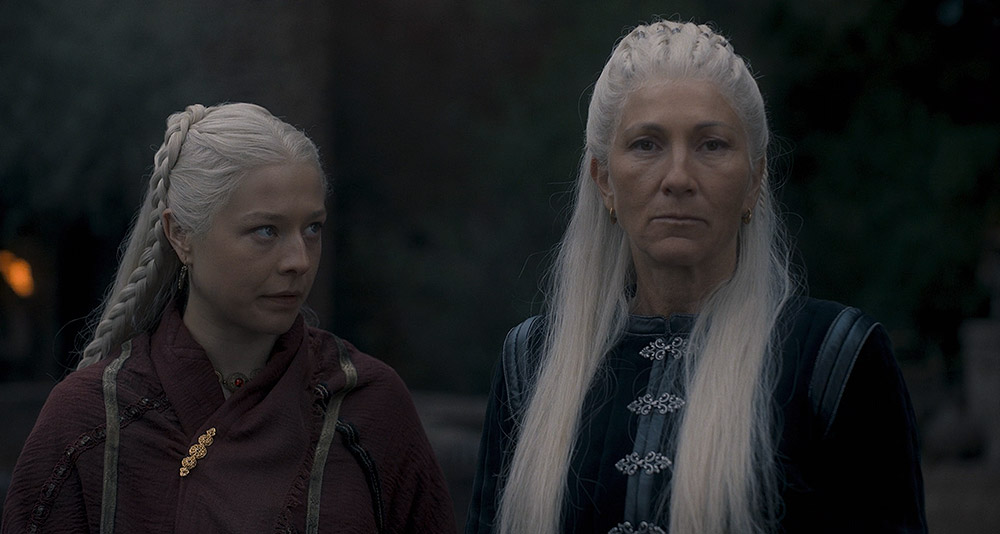 Rhaenyra offers a truce to Rhaenys in House of the Dragon, HBO

RELATED: ‘The Woman King’ Review – A Fantasy That Starts From The Truth

Those familiar with the source material know that very little happens in the grand scheme of events, and that’s going to become a problem as we get closer to the end of the first season. This is all the more difficult when the public does not know exactly who to contact, if at all.

Indeed, the only noble character in the series seems to be King Viserys, doing his best to heal gaping wounds as the final act of his reign. Daemon also makes touching overtures to his estranged brother in the episode, but they’re undermined by his repeated ambivalence and cruel nature, which are now firmly established. 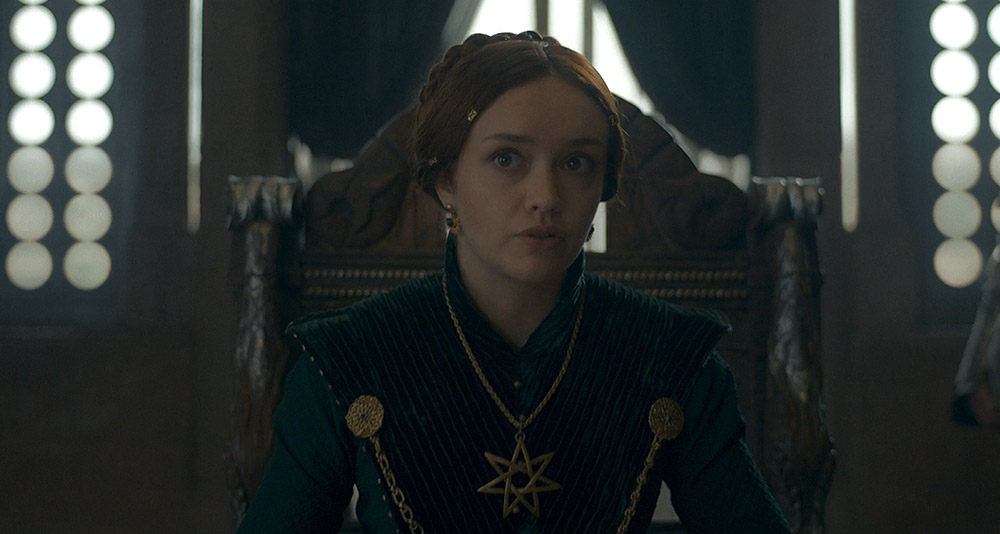 Queen Alicent at a council meeting at House of the Dragon, HBO

Every other character is either morally bankrupt or at the very least rudderless. There are no Jon Snows, Catelyn Starks or Tyrion Lannisters to cheer on in House of the Dragon. Everyone, including Princess Rhaenyra and Queen Alicent, is entitled to selfish elites interested in preserving their dynasties rather than furthering the good of the kingdom.

Dragon House The peaks and valleys approach to storytelling gets tedious, and if the show can’t pull a major rabbit out of its hat by the end of the first season, there will be a backlash. “The Lord of the Tides” does little more than demonstrate how mundane the overall story really is. If it wasn’t a game of thrones property, he may have been able to get away with more modest success. 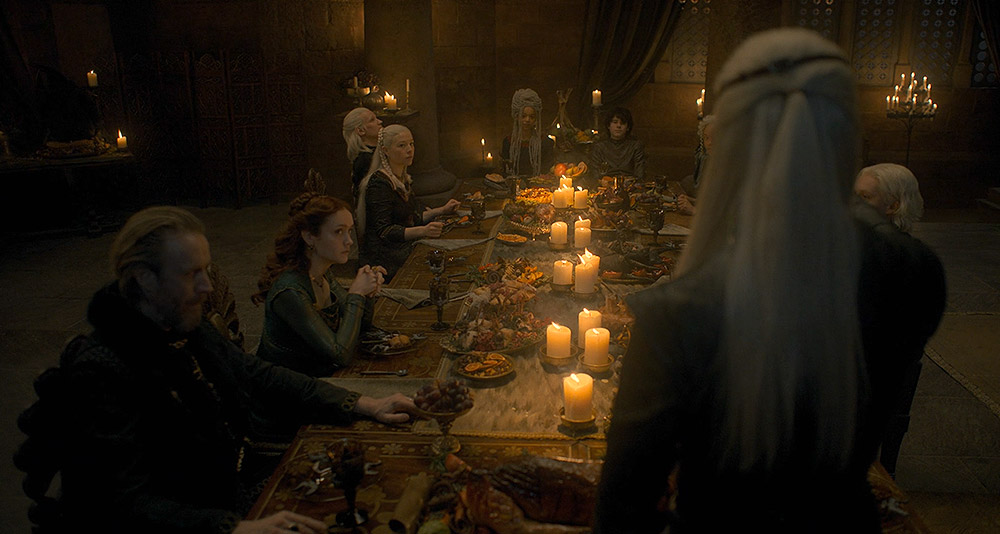 Aemond toasts his nephews at a feast at House of the Dragon, HBO

As a spin-off tied to such an iconic property, however, it falls short of expectations. This final episode is about as mundane as it gets, punctuated briefly by a shocking beheading, a brilliant dinner scene, and one character’s story closure. 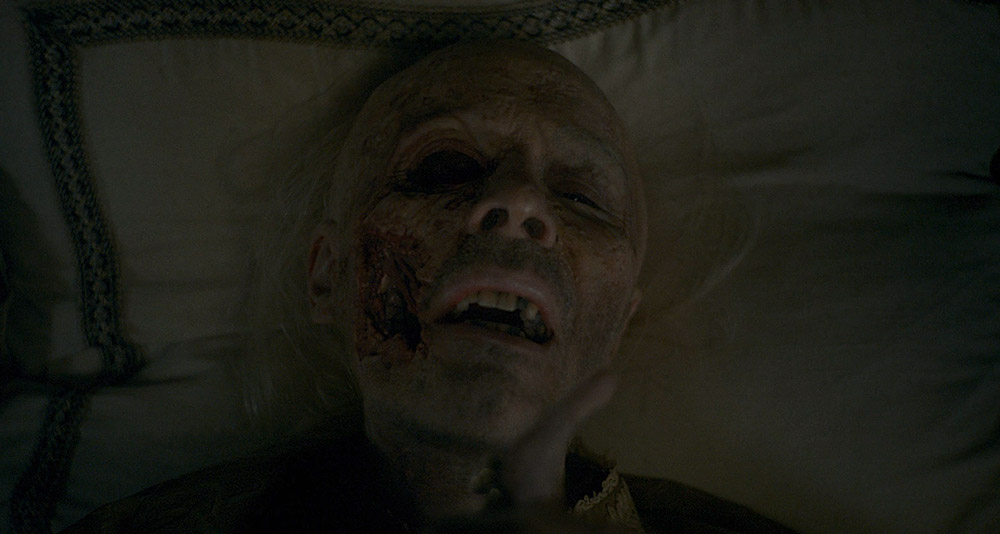 King Viserys dying in his bed in House of the Dragon, HBO

Inconsistency rules the day, and it’s enough for any longtime fan to wonder who had the brilliant idea to greenlight a show based on a fraction of Fire & Blood, which, frankly, didn’t sit well with critics, and for understandable reasons.

NEXT: Game Of Thrones Creator George RR Martin On Amazon’s Lord Of The Rings: The Rings Of Power: ‘It’s Kind Of A Weird Deal’

House of the Dragon: ‘Lord of the Tides’ (Episode 8) Review