A house full of medals for the Deguchi and Katz teams / IJF.org

It’s the first day of the Commonwealth Games judo event in Birmingham, Britain and the judo has been vibrant and fun throughout.

Likmabam (IND) dominated the grip and stayed snappy throughout, really sturdy but very quick too. Whitebooi (RSA) showed clear thinking and a solid transition today but in the final the South African stayed on his feet and threw an expertly timed o-uchi-gari early in the golden score and won a waza-ari and a gold medal. She gave a big smile and really showed how much it meant to her.

The bronze medals were won by the very happy Amy Platten (ENG) and Esposito from Malta. For Platten, it was a day of using clean technique to reach the podium. For Esposito, it was about exceeding expectations. She was absolutely an underdog and lacked experience compared to the others, but she fought with her heart and was a worthy medalist. 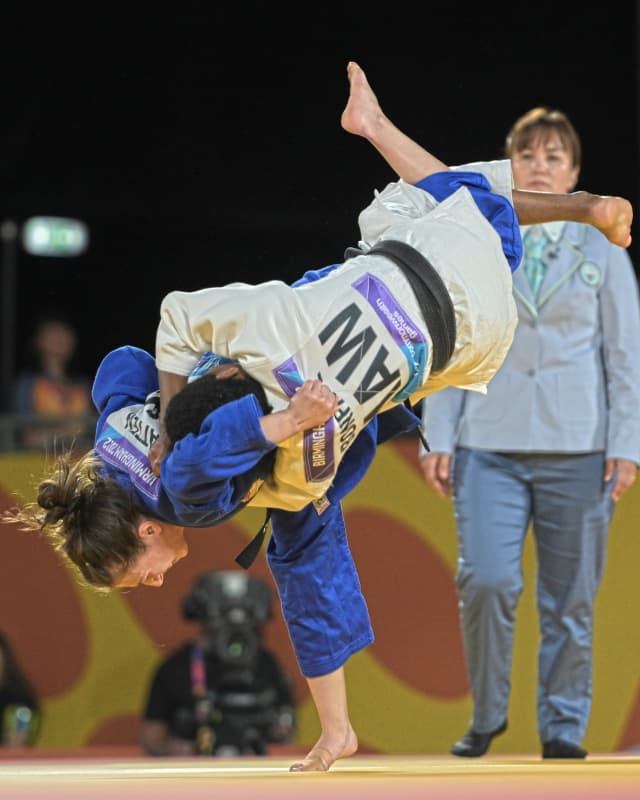 Josh Katz (AUS) was disappointed with his day but still won the first bronze medal with a mature performance. He wanted to show more but completely neutralized Zulu Momentum Based Judo (ZAM) in this bronze medal contest and it showed real balance. Zulu had surprised opponents all day with his dynamic and unpredictable style, such as the powerful left-sided koshi-guruma used against Rabbit (WAL) for a spot in this bronze medal match. 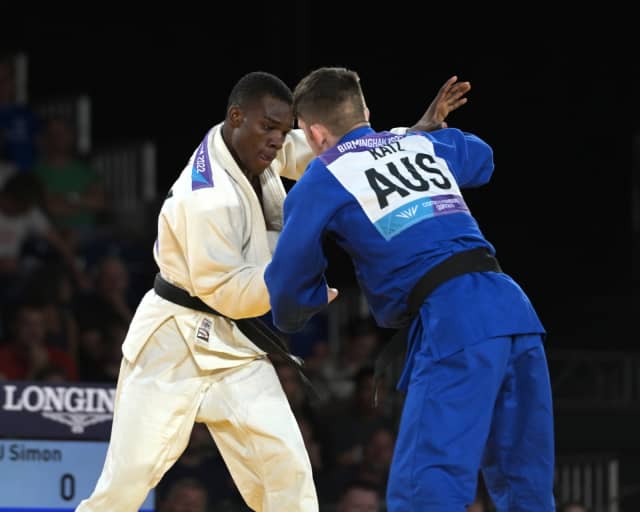 The other bronze was won easily by Yadav (IND), more experienced than the 17-year-old Cypriot. Christodoulides has had a great day at this point and is one to watch going forward.

The final between Hall and McKenzie, both of England, was highly anticipated and opinions were quite divided on the way forward. McKenzie, however, was absolutely sure who would win, throwing for two scores in the first three rallies. It was a quick win and one he relished. 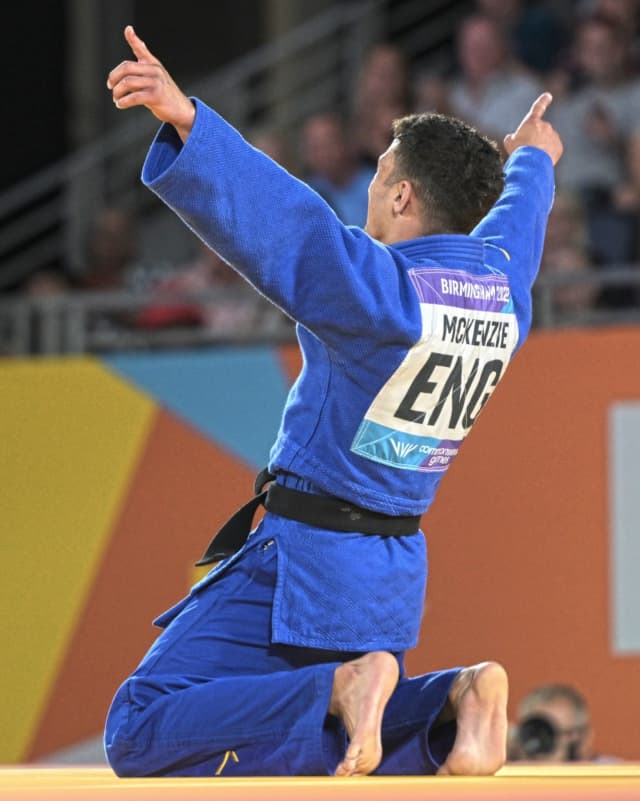 Ashley, “When I came out for the final and heard Sam’s name I was nervous, but once I heard my name and the cheers I was ready. I hope everything the world is proud of me and Sam and I can’t wait to win more medals for England.

It was special to see this category see their medals presented by three-time Japanese world champion and now technical coach in Wales, Masahi Ebinuma. 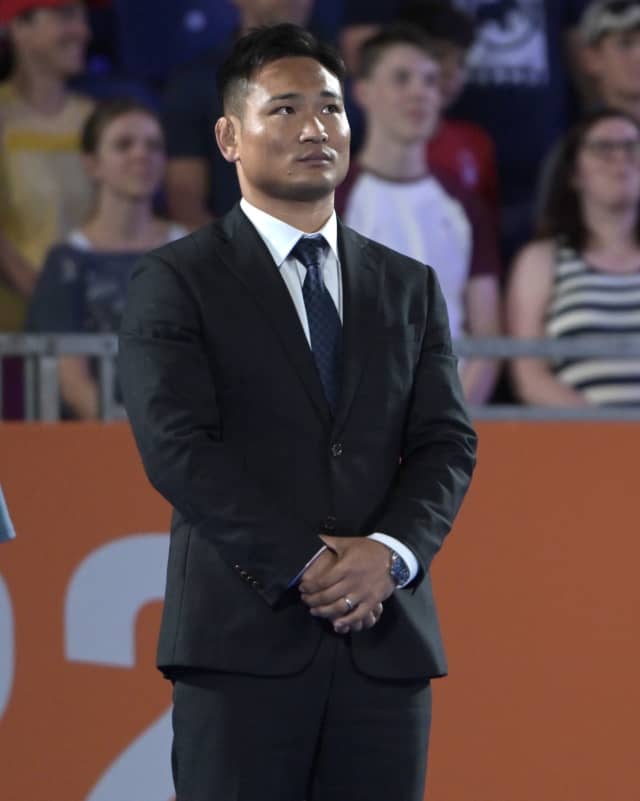 Javadian (NIR) dominated throughout against Ferreira (MOZ), with particularly strong sangaku attacks through the transition. The first bronze belongs to him by right. The second went to Griesel (RSA) with a confident sumi-gaeshi and continuation that resulted in a juji-gatame scored ippon.

The final between Kelly Deguchi (CAN) and the Australian Tinka Easton was a little trickier than expected. Canada really brought their A team and at -52kg they had their first chance to show their superiority. Deguchi chased the ne-waza in every rally although with two minutes to go Easton came close to winning on the ground with a very quick but unsuccessful turnover. Deguchi seemed content cutting instead of trying to throw for parts of the match, but she kept the pace high and Easton racked up a few penalties. Canada, however, did not consider the change in the flow of the game and as soon as the golden score started, the Australian found an uchi-mata-maki-komi and despite enormous resistance, threw it to the ground to a waza-ari and gold. Deguchi looked irritated with herself but Easton looked incredulous. 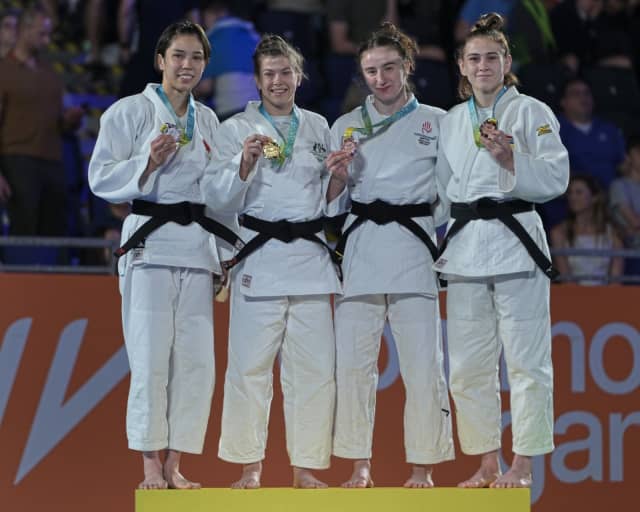 IJF Director General Vlad Marinescu was a member of the medals evening, having been very vocal at the draw and in the media about the importance of this event on the calendar. IJF support for the event was continuous and long term, as evidenced by the high ranking officials present as well as the number of World Judo Tour competitors present.

Nathan Katz AUS) and Saini (IND) faced off for the first bronze medal. Saini has come close to Grand Slam medals in the past and is no pushover, strong with direct attacks, just like he battled to win gold last week at the World Games. police and fire brigade in Rotterdam. For Katz, it was about regaining his place on the tatami after an injury and some big disappointments around the Tokyo Olympics. Saini really led from the start, being very aggressive, delivering two shido to Katz in the first two and a half minutes but with only 6 seconds left, Nathan made his first really strong attempt of the game and threw the Indian for Ippon using brilliant spinning action.

The second bronze medal was contested with similar urgency and drama, but was very tactical in the gripping phases. Burns (NIR) seemed to build into the fight, getting closer and closer to the goal with the seoi until his opponent Short (SCO) was penalized. Short answered correctly but an incredibly powerful okuri-ashi-barai from Burns brought an undisputed ippon and the medal.

The final between left-handed Balarjishvili (CYP) and right-handed Allan (SCO) was scrappy at the start. The first score came halfway with Allan looking dominant on the grip, but the Cypriot used poor judgment from the Scots thrown from a position under pressure for waza-ari. Allan built up the heat from there, nearly choking but not quite finishing him off, then chasing him down. Balarjishvili held on, despite 2 shido, and won the gold medal. It was noted that Finlay Allan had never seemed tested in terms of fitness, an impressive level of conditioning; a nice silver medal for him. 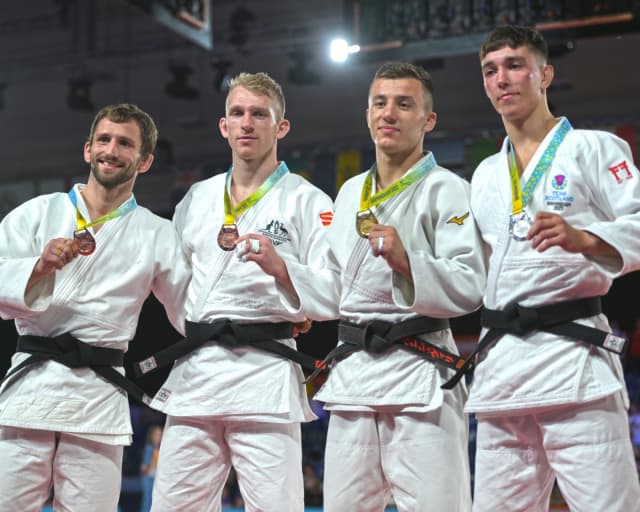 Tariyal (IND) and Legentil (MRI) battled it out for the first bronze medal, in a scrappy encounter that looked like it would end in a penalty shootout and not in favor of the Mauritian but with 12 seconds left on the clock. ko-uchi-gari which sealed the victory.

Scotland’s Malin Wilson and England’s Lele Nairne fought for the second bronze medal. The crowd was loud for Lele and it undoubtedly spurred her on. It was a hectic competition with both fighters looking strong and determined. Wilson controlled a nice ground exchange but after almost a minute he was stopped for a restart. Almost immediately, he came back to the ground and with super power attacks from Wilson. Both women took risks and hunted for the big win, but relentlessly in the ne-waza. As he entered the gold score, the back and forth continued and the explosive effort from both was exciting. With 4 minutes to go, you might have expected it to become less appealing, but judo was anything but, spirited from start to finish. Eventually a 3rd shido for Nairne ended the game, but it looked like a deflated final score line after over 10 minutes of impressive and biting rallies. It was the most disputed medal of the evening. 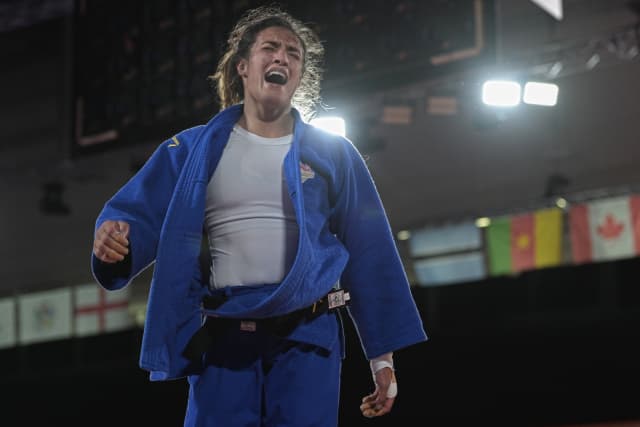 The final between the 2019 world champion and the home country’s Toprak couldn’t match the intensity of the previous game. Toprak didn’t look intimidated by his opponent’s CV for even a second, still pushing hard for the first hold. An incredibly fast osoto-otoshi from the Canadian needed to be reviewed; it took everyone by surprise, but the score was canceled because the landing did not meet the criteria for waza-ari. This seemed to annoy Deguchi and she opened up and made it impossible for Toprak to sneak in her own attacks. He came into the golden score and the England team enjoyed their daughter then breathed in applying a new heavy hold and forcing two bad drops, the second of which almost produced a positive ne-waza situation for Toprak. A minute into overtime and at 2 shido each, Deguchi finally grabbed an outside leg and managed to finish with a big ippon. Gold for Canada and a brilliant silver medal for England. 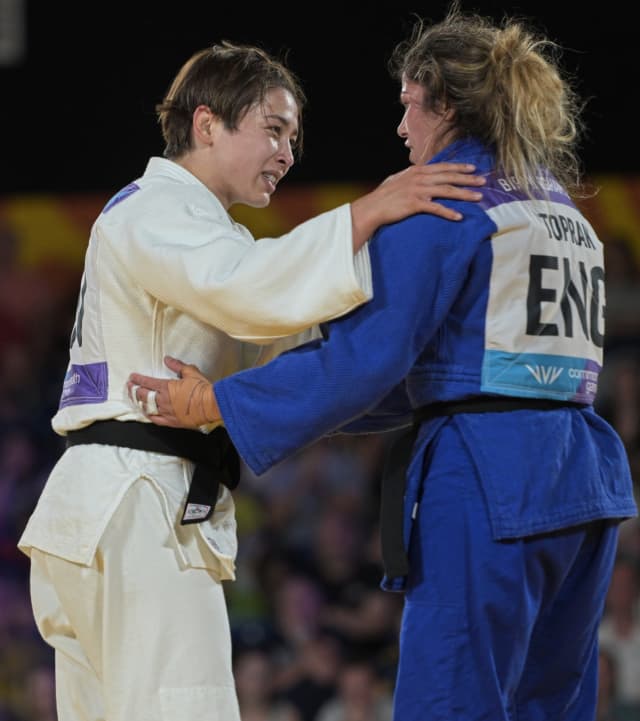 A respectful finish for Deguchi (CAN) and Toprak (ENG)

As the first day in Birmingham drew to a close, Australians Katz and Katz and Canadians Deguchi and Deguchi could have made it onto the podium on their own, with bronze, bronze, silver and gold respectively. We talk a lot about the family of judo but here it is taken at face value.

Day 2 promises to be just as spectacular and you can follow online via BBC Sport and the official Birmingham 2022 website.